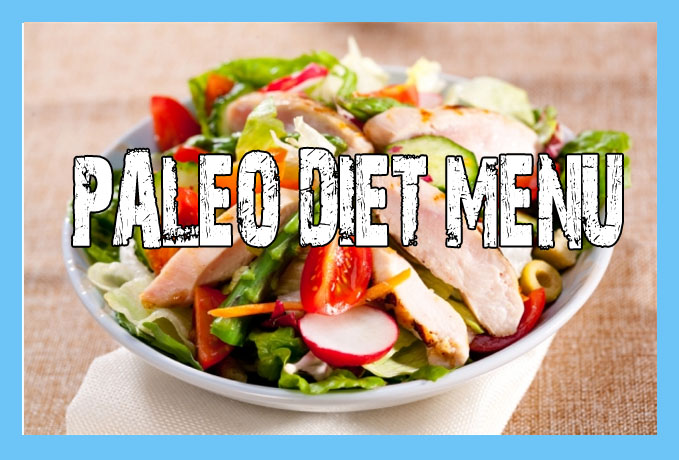 The paleo diet is designed to make you remain healthy, fit and strong for a longer period of time. Based on the ancient eating habits of our distant ancestors that lived during the Paleolithic Era, it practices a food culture rid of preservatives and additives that threaten our health today and which are the derivative of advents in agriculture and modern food processing methods. Essentially, the paleo diet seeks to imitate the food habits of the cavemen – recommending mostly raw or little-cooked food.

The paleo diet menu includes various fruit and vegetables which can be eaten without having to process them. It consists of unprocessed –or at least less processed– food items, including meat, fish, eggs, honey, fruit, vegetables, natural herbs and spices.

Here we describe the paleo diet menu and the food items that are allowed in it.

Eggs and meat –in fact, nearly all kinds of meat– are the most important food item in the paleo diet menu. The paleo diet is a high-protein diet, and protein is best obtained from eggs and meat.

Meat included in the diet should contain little fat content. It is better to go for eggs that are from free-range chickens than from caged chickens. Meats which are included should not be processed fully, while lean meats and fish are also preferred.

The paleo diet is made up of only natural herbs and spices. A considerable number of raw vegetables are included in the paleo diet plan.

Green beans, peas, and potatoes are strictly avoided from the paleo menu, as they need to be cooked first before they can be consumed. The most highly recommended vegetables are: radishes, carrots, spinach, cauliflower, broccoli, asparagus, mushrooms, cabbage, lettuce, cucumbers, bell peppers, and avocados.

Fruit play an important role in the paleo diet menu. However, those types of fruit boasting high sugar content should be avoided. The recommended fruit include lemons, raspberries, strawberries, blackberries, apples, guavas, pineapples, watermelons, papayas, grapes, pomegranates, and peaches. The paleo diet menu follower can consume as many of these as he/she wants.

Oil is another important element in the paleo diet menu. Oil from plants, such as olive oil, coconut oil, and nut oils can be included in paleo recipes. The most important and recommended oil, however, is fish oil.

Foods to Be Avoided:

In the paleo diet plan, certain food items are avoided as they go against the principle that the diet is based on. These are food items that didn’t exist during the Paleolithic Era. Essentially, food items which are the result of advancements in agricultural technology, such as processed grains and gluten for the manufacture of bread, noodles, pasta, and cereals should be avoided. Grains, in specific, have been associated with many negative effects on our health, inflicting damage to the gut lining, immune system, and other major organs of the body.

Peas, beans, and other root vegetables, such as potatoes, should also be omitted from the paleo dieter’s menu. These vegetables can’t be consumed without processing, and our modern methods of cooking them involve enough artificial substances to burden our health in a very negative way. Dairy products, such as milk, cheese, and yoghurt, are also excluded from the paleo diet plan.

Here it is perhaps interesting to note that the average American’s sodium consumption is at present twice the amount of potassium in the diet, when it should be the other way around, since potassium is essential for the proper function of the kidneys, the heart, and other organs.

The paleo diet menu, through the organic and natural food culture it promotes, makes sure that one’s system is more balanced and receives the necessary nutrients in proper quantities. A few weeks into the diet should be enough to convince you of its success: you will notice changes in your body for the better, and be on the path towards maintaining a leaner, healthier and stronger physique!